I want an all aluminum droid. You can build one out of any number of materials (wood, pvc, cardboard, styrene, resin) but none of that is appealing to me at all. But all metal means expensive, it means heavy, it means complicated… and it means waiting… possibly for y-e-a-r-s…

The first thing to know about R2 building is that aluminum parts are built in runs. Some brave builder will find about 40 other people who need the same aluminum part he needs, and will organize a part run.  The idea is that no one makes any money doing the run, costs are kept as low as possible, and by doing 40 pieces we all get a lower price. I’ve looked in to doing one off CNC parts and it’s crazy expensive and shops don’t want to touch it.  But much of the cost is in the setup, testing, and then turning the machine on to do a bunch of pieces.  When doing only one the overhead is too much.  All the parts are manufactured to a club spec so they should all fit together.  And these days people are doing “diet” parts where they drill away parts of the metal that aren’t seen in order to lower the weight as compared to producing a solid piece of aluminum.

All of this means that parts are sometimes rare because they don’t run very often, maybe only once a year or two. Also parts are not kept on the shelf. They are run in ordered quantities as needed, and then not run again until there is enough demand to justify another run of 40 pieces.

When I first got the bug to build an R2D2 I panicked because I didn’t want to miss out on any current runs, and then not be able to get that part for a year or more.  So I started ordering all of these obscure parts for my R2 build.  But I quickly had to put the brakes on because I was racking up quite a bill and didn’t have any parts that would fit together.  So I decided to back up and think it through.  I decided that certain parts were critical to make R2 look like R2 and some of these parts were also the most rare, meaning that they hadn’t run for a long time.  These are ones I’d get in on at the first opportunity.  Here is the list:

The legs can be made to order – so I’ll wait until I need them and can afford them.  Many of the body detail parts I’ll get when I get or I get in resin to hold me over.  And all of the internals, the electronics, the motors, servos, etc.. all are either readily available or I’ll have to custom design and build.

So far I’ve ordered the Dome, HP’s, and Utility Arms.  I’m waiting for Skins and Radar Eyes to run again, and I’m going to custom build a frame.  And to give you an idea of the waiting game, the Dome was ordered early in July and I’m slated to get it mid December.  That’s about 5 to 5 1/2 months.  But they’re hand spun, laser cut and are a piece of art when finished.  So waiting is the name of the game. 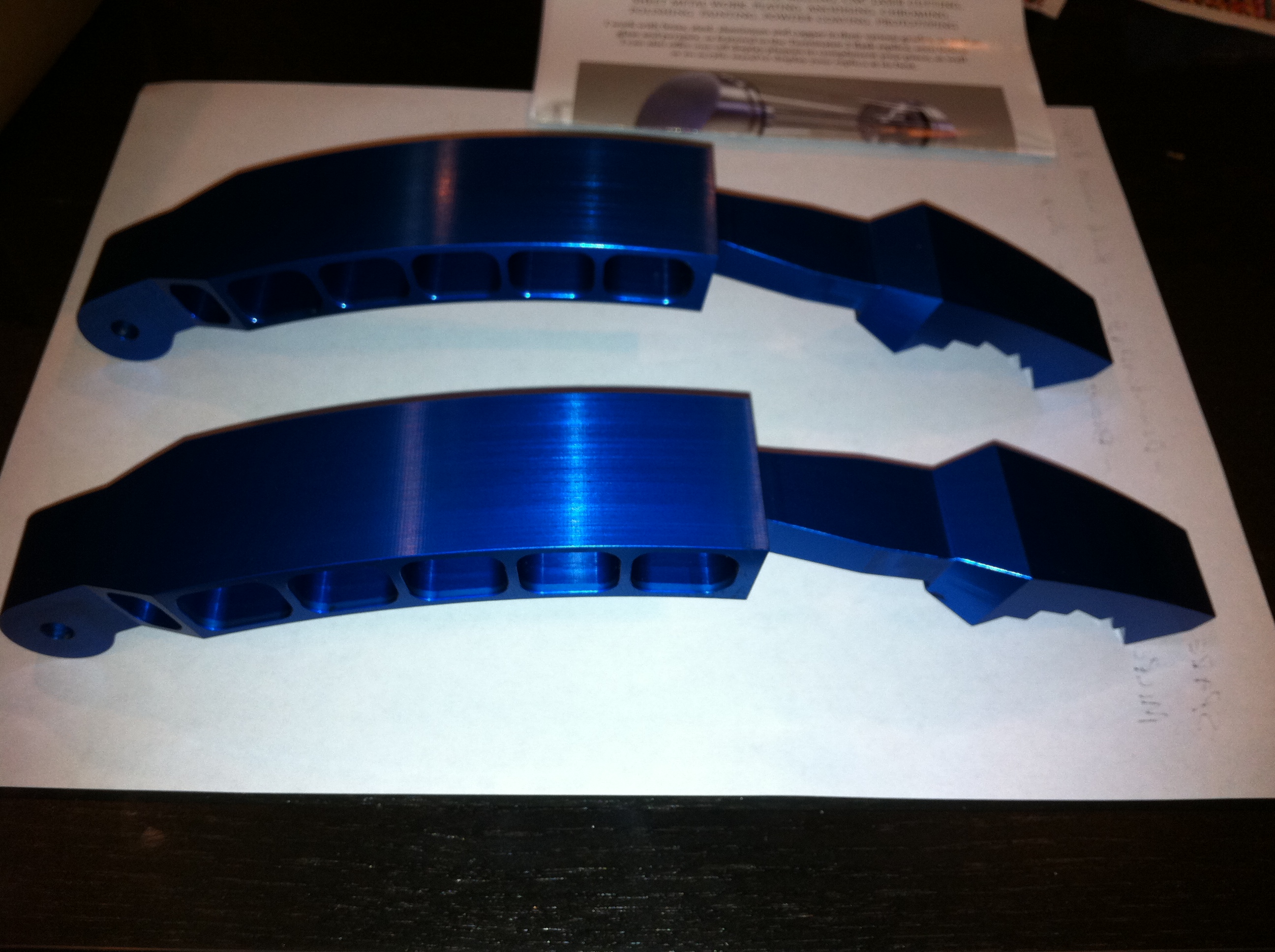 The problem is that I got 2 lower arms and no upper arm.  The holes on the bottoms of them are the ‘diet’ part where they were drilled out to save weight.  Shouldn’t be easy to notice unless you’re laying underneath R2 while his arms are out.  But I can’t have those holes pointing up.  Had they not been diet maybe it wouldn’t matter.

I’ve messaged the part runner to see what he can do.  Maybe someone else was accidentally shipped two uppers and hasn’t noticed yet.  The problem is that I had him anodize mine and he was all sold out, so I hope there’s an upper arm waiting for me somewhere or I’ll be waiting a year for the next run!